Growing crops as mixtures of different species in the same field was commonplace in Britain during the Improvements era but gradually fell out of favour in the 19oos as single crops became easier to manage and could command a high value on the grain market. ‘Grass seeds’ in the 1700s often meant not just one or more grass species, but a mix of a grass, a clover or several legumes and another species such as ribwort plantain. A cereal (corn) and a nitrogen fixing legume (pea) were also broadcast over the same field, as were mixtures of different cereals.

Mixed cropping is now being reconsidered in northern Europe as a possible means to producing the same with less input of fertiliser and pesticide. In our most recent outing, at the December 2016 meeting of the British Ecological Society, Pete Iannetta talked about the benefits of a barley-pea intercrop grown at the Institute (links at Latest). But for inspiration we can look to other places.

Mixed cropping is still widespread in the tropics, but the reasons for planting different species close together, sometimes in strict spatial patterns, are not always obvious. The scientific tendency is usually to look for a biophysical mechanism behind the pattern. Perhaps the two or more species take resource from different parts of the environment or use the resource more efficiently. Mixed cropping works – the two species together tend to produce 1.1 to 1.3 (110 to 130%) times the equivalent yield of the crops grown alone. 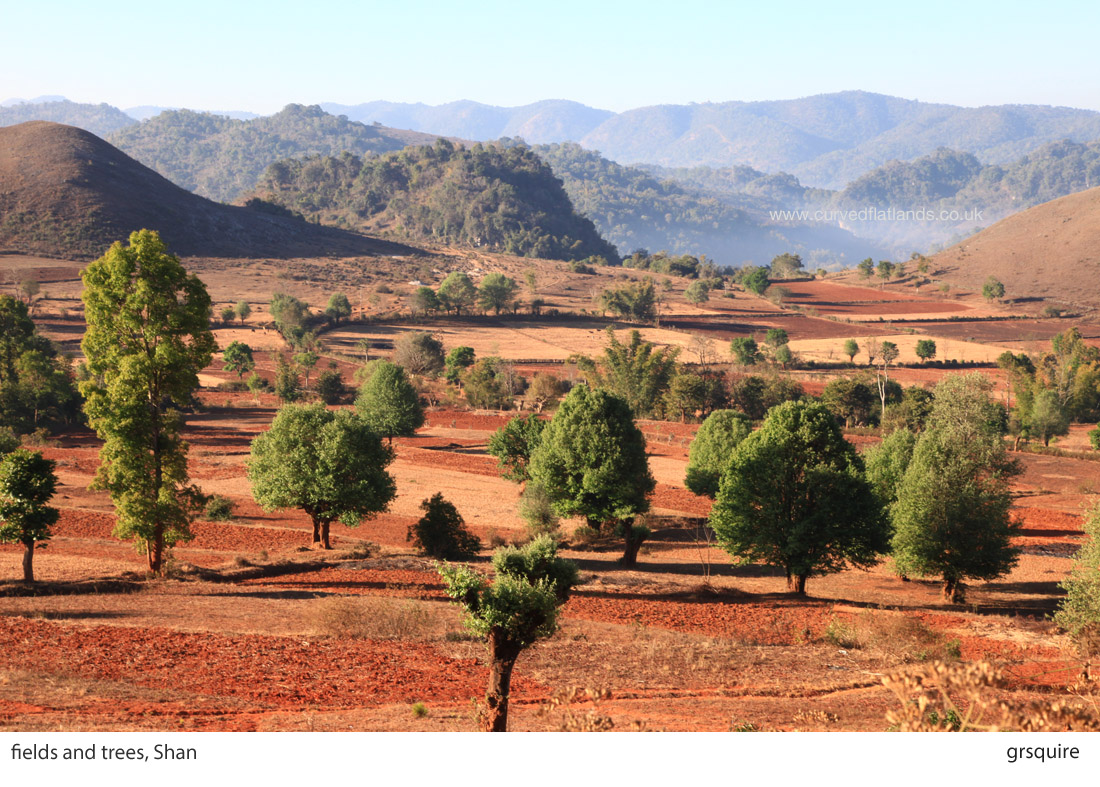 This is a useful but not a great advantage, and it may well be that the plants are grown in mixtures for other reasons also. Sometimes the arrangement might arise simply out of convenience or as a means of lowering the risk of not putting all your eggs (i.e. the few seed of one crop) into one basket (i.e. a small area of soil).

This mixed cropping, named intercropping when the plants are in rows, was frequently observed on a self-funded trip to Burma (Myanmar) during the dry season of 2014. Our interpreter, knowledgeable about local farming, was still not always able to explain what was behind the crop configurations.

The biophysical basis of the intercrop was best appreciated for perennial plants such as the pigeon pea Cajanus cajan grown at Bagan with cotton, probably one of the shrubby species, and another plant that had shrivelled to unrecognition in the dryness. The pigeon pea would have fixed and released nitrogen to the soil for the cotton to take up. In some fields, the pea had recently been cut back to stop it using water, whereas the cotton, most likely deep rooting, was in full flower and fruit and using the water and nutrients stored in the ample soil-space between cotton rows. 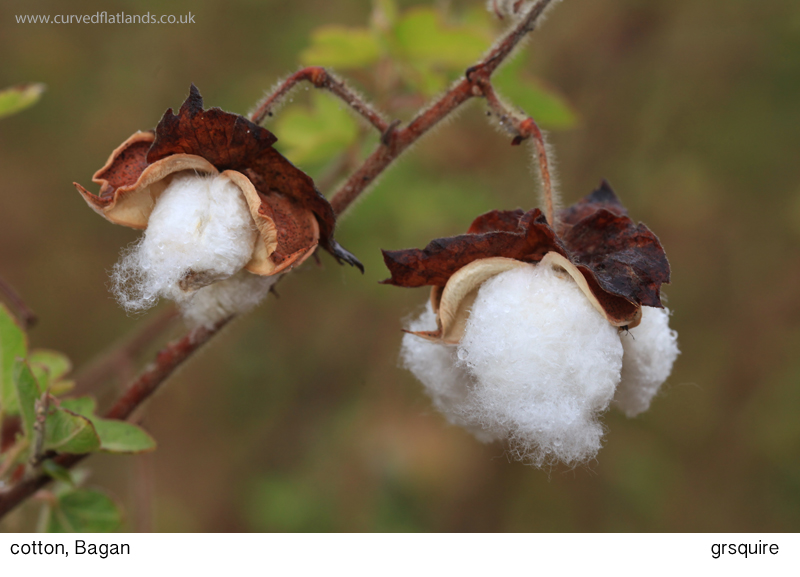 On the banks of the Irrawaddy, highly regimented rows of groundnut Arachis hypogaea had maize Zea mays sown within every 5th row (image below). The land would have been awash as the river rose in the wet season, when presumably the silty soil, and any nitrogen fixed previously by a legume, would have been picked up in the current and deposited somewhere else.

The crops were therefore growing on nutrient-rich alluvium and soil-stored water. The maize was starting to flower but the groundnut was still in leaf only. It was unlikely that this year’s N fixation by the groundnut would have ‘leaked out’ so early in its growth. Rather, the maize was taking advantage of additional resources, sunlight above ground and residual soil nitrogen from the bordering rows. 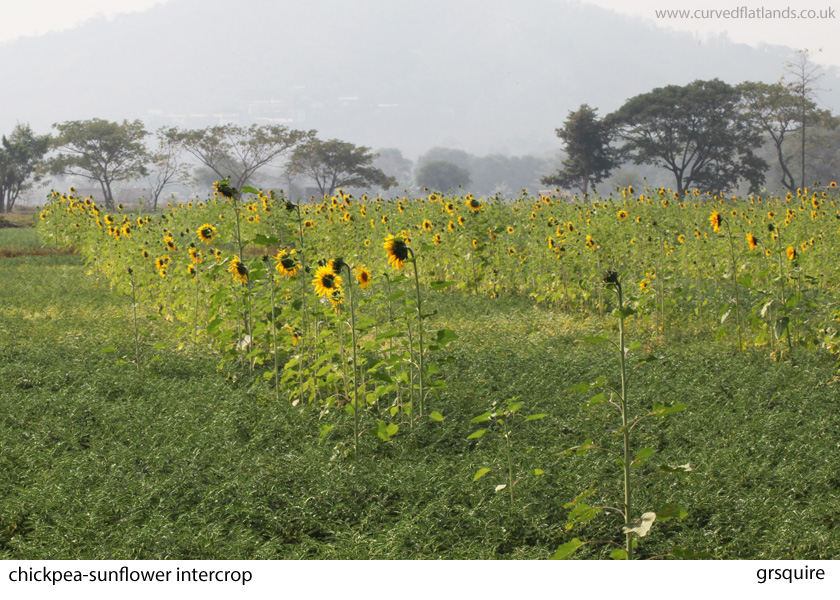 Elsewhere, a field of the nitrogen-fixing chickpea Cicer arietinum had been planted with widely spaced rows of sunflower Helianthus annuus.  The sunflower would have benefitted as the maize in the previous example, but it was difficult to see the advantage to the chickpea. Possibly, the farmers wanted some sunflower seed or oil and grew a few plants in what was otherwise a chickpea field.

But why plant in rows …? Rows are generally easier to establish with animal-drawn implements than are small blocks of crop. Intercrop rows also make it more difficult for a farmer to lose a large proportion of one or other species. Repeatedly, patches of a few square metres occurred in the intercropped fields where the crops were stunted or dead, probably due to poor soil or disease. Planting in rows allows both crops to experience the whole field, its good and bad parts. 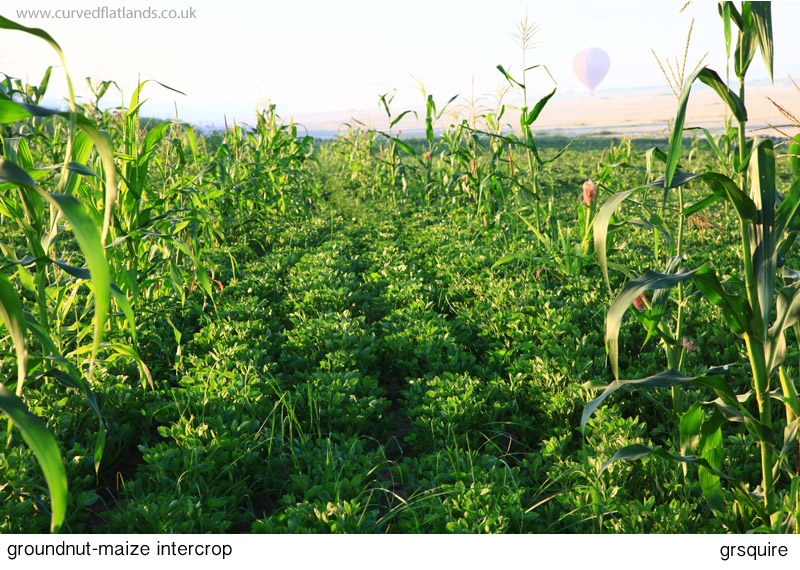 In a further set of configurations, the growers appeared not to have planned the mixture. Rather, they took advantage of a situation in which other species emerged with the sown crop.

One such was a small plot of groundnut in which plants of the Chenopodium genus (probably C. album) were growing in a random configuration. Someone nearby, who knew the practice, said that Chenopodium appeared whenever groundnut was grown. It probably emerged from the soil seedbank, stimulated by conditions peculiar to groundnut cultivation. It was encouraged – the ‘weed’ is widely used as a salad vegetable, as it was once in Britain.

Another example was a field of groundnut again, but one that appeared invaded by two or three other species. Chenopodium was there again but also maize and sunflower, and each was located irregularly, not in rows. The groundnut had been sown but the others, including the two crops, had emerged from the soil seedbank. They were ‘volunteer’ weeds, and had been left, not weeded out. 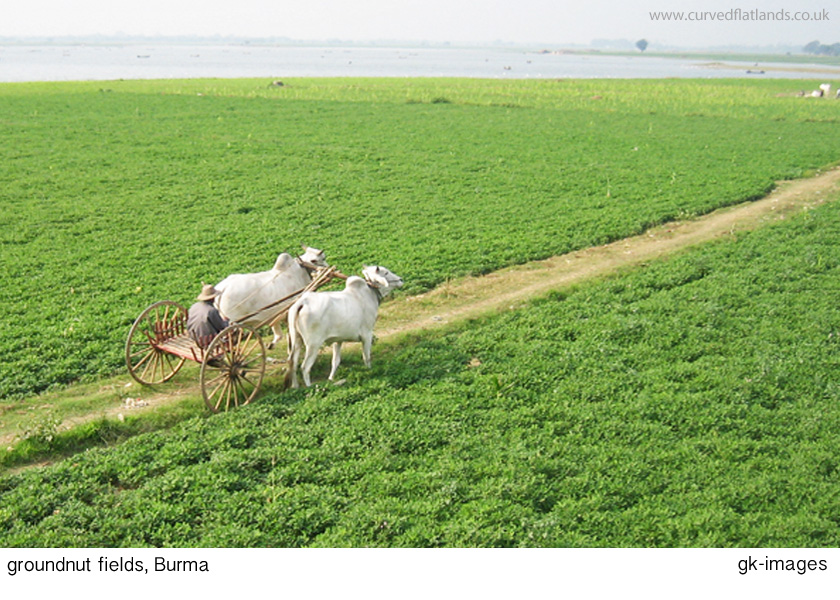 In Shan agriculture, a mixed crop new to my experience was one of taro Colocasia esculenta, ginger (Zingiberaceae, species uncertain) and chillie, species of Capsicum. It was easy to walk past the field, because the chillies had been harvested and the taro tubers and ginger were mostly invisible underground.  This was an intentional mixed crop. There would have been biological interactions between the three, but perhaps the main advantage was one of getting three crops from the same bit of land in one year – the chillies first, finally the taro.

Repeatedly, crops were seen growing in intended and apparently random configurations. Fruit trees were grown in small orchards, where they usually had an understorey of legumes or mustards. Fruit trees were also dotted around the landscape, enjoying the benefit of nearby fixers and fumigants.

Palms were common, often grown in lines or groves within the general mix of annual cropping. On the high land, fruit and beverage trees were commonly grown in planned (tea and oranges) or semi-random configurations. 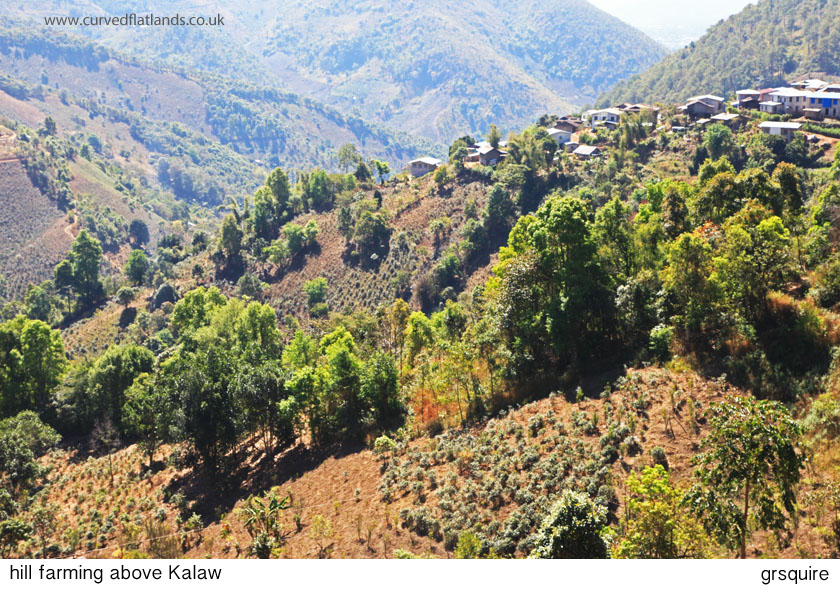 This brief experience, over only a few weeks, introduced the sheer diversity of crops and farming methods here, the ubiquity of legumes, the widespread use of ‘wild’ plants, and the frequent desegregation of the sown and the wild.

Perhaps the lasting impression is one of nitrogen-fixing legumes being among the commonest crops, essential to the mix, whereas in north-west Europe, they have been reduced to minor status.

In some areas, the people had a very advanced understanding of how plants complement each other and together provide human dietary needs, an understanding that has almost lapsed in mainstream farming in north west Europe.

Subsequent pages will deal in more detail with (2) perennial pigeon pea-cotton at Bagan, (3) groundnut-maize by the Irrawaddy and chickpea-sunflower near Mandalay and (4) assorted mixtures which may or may not have any biological advantage.

We visited Burma, not in any official capacity, but as ‘tourists’. I had intentionally not read any of the reports from international development agencies before going there, wanting instead to get a first-hand (even if fleeting and random) feel for the soil, people, plants and agriculture. Many of the reports read since have seemed to me to be a bit impersonal, not fully accepting and promoting the great ingenuity and knowledge of the people who live and farm there.

We were more than fortunate to be guided during a crucial part of the visit by Ei Ei Lin (or Lin Latt). Her farming background and natural curiosity introduced us to many hidden wonders of (plant) life in the dry season.

For factual and largely non-judgemental information, the following report offers much on the conditions in Burma’s dry zone:

Books read during the visit included (and both freely available in bookshops there):