The area within and around the historical site of Bagan is mostly scrubland, interspersed with occasional small areas of mixed cropping. The unmetalled roads and paths are ideal for cycling in the dry season.

Cotton and pigeon pea Cajanus cajan were here intercropped with an annual plant that was too schriveled (for me) to recognise. Some of the pigeon pea was seeding, the pods ready for harvest, whereas other plants had already been cut back to a few stems, to reduce uptake and loss of water.

The cotton looked like one of the shrubbier species and was in various stages of reproduction – many plants had open flowers and open bolls. People were pruning and harvesting along the rows. 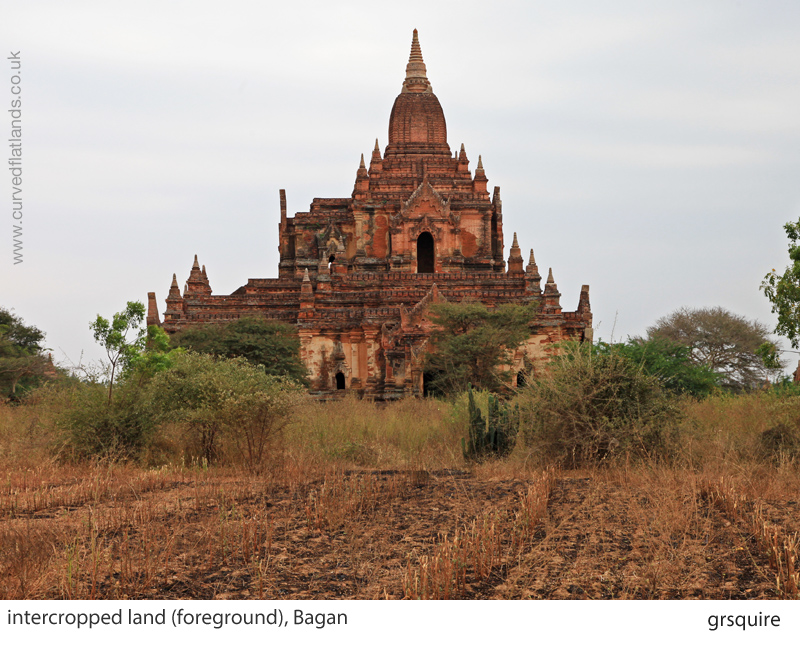 The practical benefit of rows

The cotton, pigeon pea and the annual were in neat rows. The practical value of rows needs stating – people can walk between the rows of plants, pruning and harvesting. In this way, all cotton and pigeon pea plants could each be easily found. There were only two ‘sides’ of each plant to deal with.

In this form of mixed cropping, planting in rows is as much for convenience as giving a biological advantage. In the hypothetical case that the plants had been mixed throughout the field, it would have taken much longer to locate each plant and then to attend to all four ‘sides’.

The row structures are shown in the image below. Cotton rows (C) were each 5 to 10 m apart. Pigeon pea (P) rows were about 1 m apart in some areas where nothing else appeared to have been grown (e.g. to the left in the image), or else wider, interspersed with 3 or 4 rows of the annual in other areas. 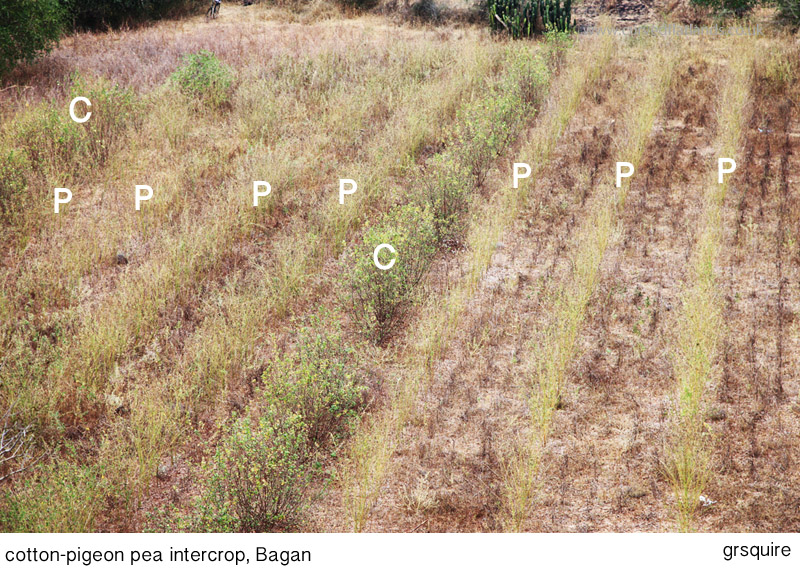 Whatever the biophysical benefits of the row structure, this arrangement was dictated mainly by the need for ease of location, pruning and harvest (and also probably manuring, which was not seen here on this visit).

The possible biophysical benefits of the arrangement

The row structure was also compatible with the phasing of the three crops. The annual had been harvested weeks if not months earlier. The pigeon pea was the next to mature and was largely cut back, whereas the cotton was still in green leaf, flower and seed.

Pigeon pea would have fixed its own nitrogen (probably, but there was no way of confirming this on a brief visit) and then released nitrogen (N) back to the soil as the plants were cut and died back at harvest.  In a perennial system such as this, cycles of fixation and release allow the other species to use the fixed N.

However the cotton is not necessarily dependent on pigeon pea for its N. Simply by not needing to take up mineral N for its own purposes, the pigeon pea leaves more mineral N for other plants. The cotton plants would have been using water and nutrients from the soil not just below them, but also below the adjoining rows. They would have no or little competition from other plants at this time of year. 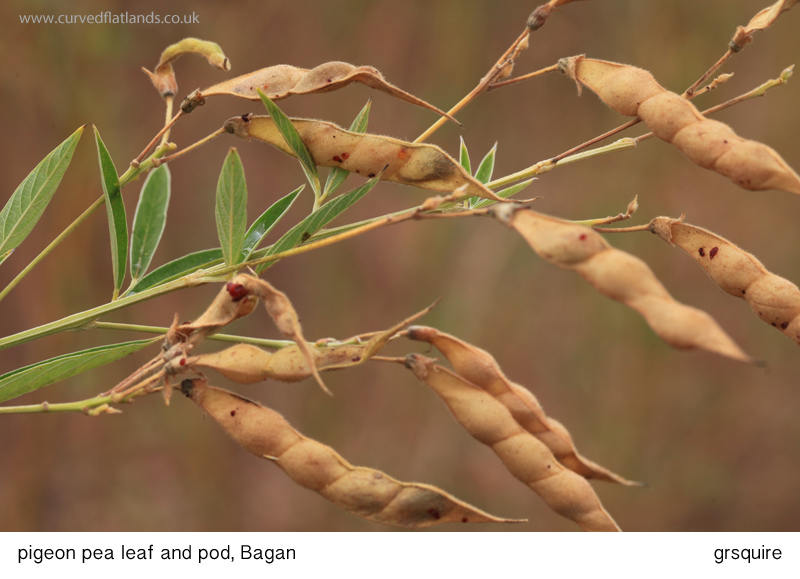 It is not clear that the cotton brings a benefit to the other plants. The rows might reduce wind speed and encourage deposition of air borne soil particles.

The below-ground interactions will be complex, however. All the species need to take up other mineral nutrients, notably phosphorus and potassium. Being perennial, the system would allow fungal and mycorrhizal structures to form, linking roots to the soil. The benefits or otherwise of this connectivity to each species are uncertain without detailed study.

In parts, cotton was seen in rows without any other plants near them. Rows of cotton are seen behind the bovine in the image below, and also under the palm trees, which themselves are in rows here. Possibly, this cotton was the beginning of a row intercrop. Once cotton was established, other plants would be placed in rows adjacent to them. There was also evidence of rows of older cotton with nothing much around them.

The impression, overall, was that practicality and phasing through the seasons determined the arrangements of the plants. And the perennial nature of some of them allowed flexibility, in that the the spaces between the long-lived plants could be filled with different species over time and also could be left empty for a year or more if needs be. 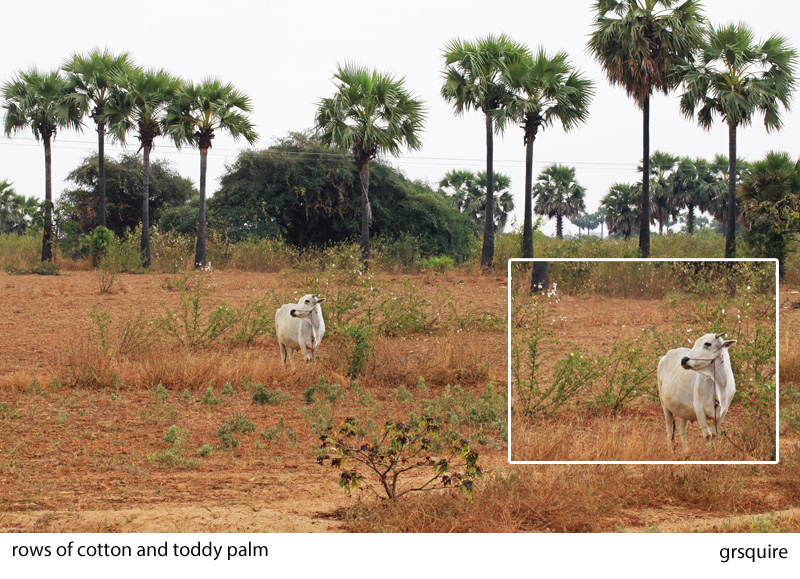 There was evidence among these small patches of mixed cropping that resources were precious. The unharvested parts of crop plants had been cut by hand and left to dry, to be used as mulch or fodder. No animal dung was wasted.

The art of farming here lies variously in the concentration and placement of nutrient resource and in the sequential phasing (and sharing) of water, nutrients and solar radiation.

Much of the vegetation at the historical site is scrub, consisting of bushes and grass, dotted with small trees. It has to withstand a period of a few months with little rain.

In places, small trees and bushes had been left within the mixed cropping. They could easily have been removed. It was unclear why they had been left – perhaps as an aid to soil and water conservation or because they yielded something useful.