Archaeological evidence from many landscapes across the globe shows agricultural land divided into geometric shapes. Linear features may have been constructed as drove-ways to move stock from one piece of land to another; or for cultivation by teams of animals dragging a plough that was difficult to turn. Squares or or other shapes with conserved side-length, are preferred when something has to be contained, such as stock animals or valuable crops that can be surrounded by a wall or fence.

Similar features occur when more than one species of crop is grown in a field. Such intercropping or mixed cropping is widely practiced in many agricultural regions. Smallholder gardens will often consist of small blocks, sometimes even single plants, grown close to each other, sometimes under the shade of a tree-crop. Perhaps the most widely observed configuration is that of lines or rows. One species might occupy one or more adjacent lines, then another species then back to the first species, as in the example below of an intercrop of chickpea and sunflower [1].

Not all mixed crops are grown in formal configurations. Seeds can be mixed in the bag or mechanical sower and broadcast on the land. Two or more species then emerge together to form a mixed stand.

Also, unintended mixtures can occur when seed dropped on the soil by previous crops emerges in a later one (see below). Whether unintended or planned, simple mixtures have been recorded in agriculture since records began.

A new dawn for mixed cropping in Atlantic Europe?

Three factors need to be assessed when considering the (re)introduction or expansion of mixed cropping. One is whether a biological advantage results from growing the species in a mixture: if there is, the grower gets more from the land or resources than they would if the crops were grown alone over the same area. A second is whether the mixture provides a convenience: even without a biological advantage, it might simply be easier for sowing and harvesting to grow two or more crops in a particular configuration, especially if the grower wanted a varied output (e.g. cereals, legumes, fruit, vegetables) from a small plot of land. The third is whether the mix provides a safeguard or security against unexpected events: here, a biological advantage and ease of management may combine to ensure something is produced.

The type of mixture used in previous times may also be a practical guide to what might still be feasible. In Scotland, and elsewhere in Britain, the most common sown mixtures from the 1700s to the early 1900s were intended for hay and grazing. They were rarely ‘grass only’, but comprised grasses, legumes and other broadleaf species in proportions varying with the intended use [2]. The legumes in the mix, the most abundant being white and red clover, fixed much of the nitrogen used by subsequent grain crops.

Also references are repeatedly made to assorted mixes of corn and grass, where barley or the landrace bere was sown as a ‘nurse’ for the more valuable and longer lasting hay or grazing mixture [3].

Mixed arable crops (no grass) were also mentioned in sources from the 1700s and 1800s, mainly as sown seed mixtures, very rarely if ever as line intercrops. But by the time formal agricultural census began in the later 1800s, sown crop mixtures such as mixed corn and mashlum were grown over a very small area.

The two most widely grown crop mixtures in the north of Britain go under the names mixed corn or mixed grain and mashlum. Mixed corn consists of two or more cereals, barley and oats for example, while mashlum consists of a cereal and a grain legume, typically oats and beans (Vicia faba). Mashlum reached its 20th century peak during WW2 (Fig. 1). The subsequent fall but continued usage of mashlum was documented on the Living Field web site [4].

Mixed corn or mixed grain appeared as a separate entry among grain crops in the Agricultural Census of 1929 [5]. Its area expanded and contracted over the next 50 years but generally remained less than 0.05% of the combined cereal area (Fig. 1). There is little information of why mixed corn was grown and also why its area was so small. Oat dominated the cereals in the earlier part of the period shown, then gave way to barley and wheat. 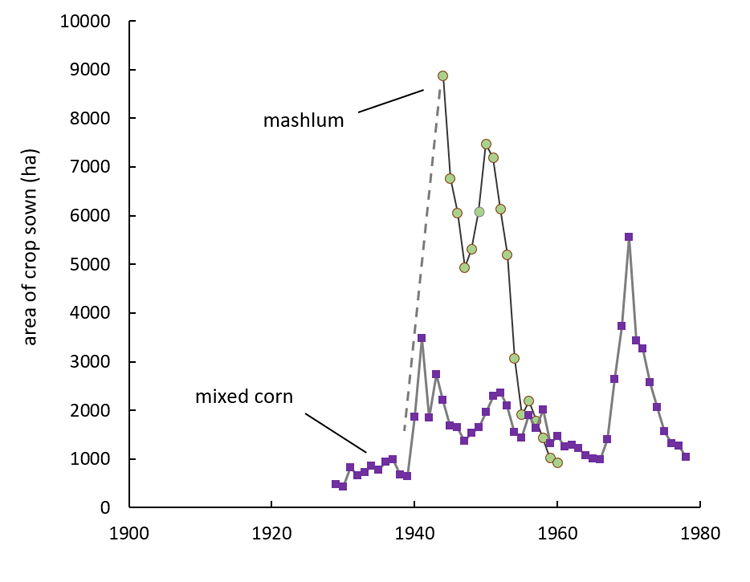 Fig. 1. The areas sown with mixed corn and mashlum in the Agricultural Census for Scotland [5]: mixed corn not identified from other cereals before 1929 and after 1978; mashlum grouped with other forages before 1944 and after 1960. Over the period shown, mixed corn comprised less than 0.05% of the combined cereal area.

Cereal mixtures grown elsewhere in the UK offer some explanation. A mixture of barley and oats named Dredge Corn was a feature of arable in the south west, mainly in Cornwall [6]. Its area was uncertain due the fact it was returned as ‘barley’ before 1919. As the quote at the top of the page implies, it was used as a safeguard, to ensure a reasonable yield under most conditions. It had a place in the crop rotation, sometimes replacing oats, sometimes barley, and was used in particular for a whole crop feed when the soil or the year was not capable of producing a pure crop of quality to sell as grain.  The proportions varied but were typically two parts oats to one barley. Wheat was added in some cases, making a three-part mixed grain.

While it was certainly grown as a safeguard, it was also attributed biological benefits [6]. It was stated to produce more grain than barley alone and generally more than oats alone, oats being deeper rooted and thereby accessing more resource. In dry years, barley grew to fill the ‘gaps’ left by dying oat tillers. The straw was of higher feeding value than the individual crops, due to better overall structure. But perhaps most relevant to the Atlantic climate, the mix was better able than barley or oat alone to withstand the forces of wind and rain to flatten the crop.  Similarly, one source reported that another variant – a mix of white and black oats – gave a greater yield (of straw) than either alone – the stronger stemmed white supporting the finer stemmed black.

Despite such reports from farmers, there is little hard information on the yield advantage given by mixtures sown on the fringes of Atlantic Europe. They might have given the 1.1. to 1.3 times advantage widely recorded for intercrops, but without the experimental data from the 1920s or earlier, there is no way of knowing.

The widespread occurrence of unintended mixtures

It is the nature of small-grained cereals – oats, barley, wheat – to drop seed before or at harvest. The seed remains in the soil and, depending on conditions, emerges in a later crop. Today, such crop-weeds are commonly termed ‘volunteers’ [7]. The sown species and the volunteers in effect form a mixed crop (image below for wheat in barley). Other crops also generate volunteers. Those of oilseed rape are the most visible, but potato and field bean (Vicia faba) often produce mixed crops with cereals, though these broadleaf species may be really controlled by selective herbicides today.

Unintended mixed crops have been a feature of cereal lands probably since domestication. If the intended product was whole-crop cereals to be fed to stock, then they would have been seen as a benefit – free seed. However, they may also create a problem. They are an unwanted nuisance when they have to be separated from the crop, for example when a pure seed-harvest is needed, and they could harbour and carry over disease. Volunteer cereals are not a recent problem: records from the 1500s [8] on oats relate “that they grow amongst wheat and barley without being sowen, as an evil and unprofitable thing ..”.

Mixed corn, and mixtures of corn and grain legumes, have been recorded for centuries in Scotland, and more generally in Atlantic Europe, but their benefits have not been adequately quantified. Where they were grown, it was as broadcast seed mixtures rather than line intercrops. By the early 1900s, they were minor crops. After the 1940s, agriculture was aiming for the high yields promised by intensification: mixtures almost disappeared.

Current reappraisal of crop mixtures might perhaps examine why in the early 1900s they never became major crops and why they were rarely grown as line intercrops.

[1] Photograph of chickpea-sunflower intercrop taken in Burma (Myanmar). Details on curvedflatlands at Mixed cropping in Burma.

[2] Seed mixtures for hay or grazing from the 1700s to the early 1900s are described in a related article on curvedflatlands: Grass mix diversity a century past.

[3] Crop mixtures are frequently referred to by Andrew Wight in the Present state of husbandry in Scotland (1778-84. Volumes 1 to 6), where one of the components (usually bere or barley)  is most commonly a ‘nurse’ crop, protecting the others, which are usually grass mixes (grasses, legumes and other broadleaf species) to be used for hay or grazing.

[4] Mashlum, Scotland’s cereal-legume seed mix, still occasionally grown, is described on the Living Field web pages at Mashlum – a traditional mix of oats and beans  and Mashlum no more! Not yet.

[5] Data in Fig. 1 are taken from the online Agricultural Statistics in Scotland one of the Historical Agriculture Publications on the Scottish Government web site. Based on the 1965 census, Coppock created an atlas in which the small area sown with mixed corn was noted with the comment that it was ‘not grown in the great majority of parishes’. Ref: Coppock, JT. 1976. An agricultural atlas of Scotland. John Donald, Edinburgh.

[7] Volunteer weeds, derived from crops, and presently common in Scotland  are described at the Living Field web pages on Crop-weeds.

[8] Quote on oat from L’Agriculture et Maison Rustique by Estienne and Liebault, 1593 edition. Further details and origin on the Living Field web pages at: Ready, steady mundify (your barley) and  The Library of Innerpeffray.