A place was needed to expand on some of the research and technical development arising from the organisations in which I have worked in recent decades.

The emphasis here will be on current research, outputs, projects and the successes of colleagues at the James Hutton Institute near Dundee, but it will also draw much on past experience, in the UK, with European partners and in Africa and Asia.

From around 1998, my aim had been to build – with a background as a Biologist – theoretical and practical capacity in land-use systems, primarily those that produce food and other natural products, but need to sustain their own capacity for survival and to share their space with other living things.

A brief biography is given lower down the page.

The Agroecology group at the Hutton Institute has maintained its aims since the late 1990s despite several changes of departments and administrations. It consists mainly of quantitative and experimental biologists with an interest in ecological processes and production ecosystems.  Its primary aims are to record, observe and understand .. and then recommend, rather than promote one particular form of land use over another. The group works with interests in farming, conservation, industry and policy but does not represent one over another.

Funding has been from several sources. Sustaining the effort over more than two decades, the Scottish Government and the various departments that preceded it, have offered welcome continuity and allowed the formation of a strong base that includes theoretical capacity, major experimental field platforms and site networks.

Other funders include UK departments of the environment, now Defra and previously DoE, the European Union which has made career-saving contributions on several occasions and industrially partnered sources such as LINK, Technology Strategy Board and Innovate-UK. UK research councils contributed in the 1990s and 2000s, but only when we could be associated with a university that fronted the research. As a Scottish institute, we have been mostly ineligible for funding from those sources in recent years.

Around the time I left the Hutton Institute in 2018, colleagues were eminently successful in gaining further EU funding  -see  How…Next…for  Agroecology. I wish them well.

The site will concentrate on the topics in the header line, the content of which will appear in the right hand menu.  It will be linked to the Living Field web site www.livingfield.co.uk which also deals with sustainable systems and environment 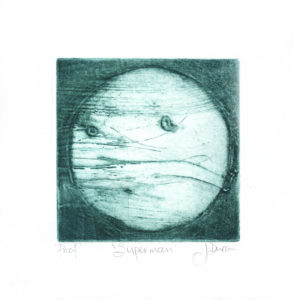 but more from the angle of crops, cropping systems, historical change in the croplands, natural products, art, craft and community involvement.

A few days before this web site was to go live, Jean Duncan [1], an artist who worked with the Living Field project fortuitously gave me a proof of her etching ‘supermoon’ (right). And it is with her permission that supermoon is used as the emblem for this site.

[1] Jean Duncan’s work with the Living Field project can be found at http:///www.livingfield.co.uk/jeanduncanartist and at her own web site jeanduncanartist.com. The supermoon was seen on 16 November 2016.