The profile of Agroecology at The James Hutton Institute has evolved over the last two decades. The group has weathered repeated challenges since its millennial beginnings, but faces real threats in the uncertain relation between the UK and the EU.

This note examines the changing sources of funding available to the Group.

The word has several meanings in current usage. Agroecology at the James Hutton Institute brings a highly quantitative approach, combining experimentation, statistics and modelling, to understanding state and change in managed ecosystems [1]. It is ‘systems’ science at scales from the plant to the landscape. More widely, agroecology has come to mean forms of agricultural production that tend to balance the stores and fluxes of energy and matter between human needs and the long term future of the ecosystem.

The two meanings are not incompatible. Agroecological studies at the Hutton clearly point to a future in which ‘scorched earth’ strategies have no place. But to get to that conclusion and to design sustainable systems, we work on a range of approaches to ecosystem management that includes those reliant on severe and frequent disturbance and high inputs of pesticide, fertiliser and fuel.

The funding of land-based research in Scotland has had the advantage of consistent support from Scottish government through funding to Scottish institutes, both before and after devolution. This support has enabled research groups to establish a base from which they can seek additional finance from other sources through what is commonly called ‘competitive funding’.

The sequence of competitive grants awarded to Agroecology at the institute is shown in Fig. 1. Most are for 3-4 years, except a few one-year projects that tend to be exploratory. The 3-4 year grants each typically bring a few hundred thousand £ sterling to the Institute, enough to pay salaries of research leaders and technical staff. Many other grants, bringing <£50k, are not shown.

The challenges to be faced are clear. For the first ten years, the group was sustained on competitive funding awarded from sources within UK government departments and research councils. Those sources dried up unexpectedly in 2006-2007, and the group had to change tack or go out of business. New sources were found, mainly in the EU (blue bars) but also through new applied funding from industry-government initiatives (green bars) such as Innovate UK.

In 2017, Agroecology achieved unrivalled success for a small research group in securing three major, multi-partner EU grants, two of which it coordinates.  And the UK intends to leave the EU in 2019. How next!

[Read on for a short history of the first 20 years.]

The Scottish coordinated programme in Vegetation Dynamics funded from 1995 provided a foundation. The first competitive grant was secured in 1998, for one year. There followed a succession of projects from UK sources, coloured orange-red on Fig. 1, mainly departments of the environment, agriculture and food (DETR, Defra, MAFF, etc.) but also research councils (NERC, BBSRC) when it was possible to team with eligible institutes from England and Wales. A couple of Scottish competitive grants are in there but not distinguished.

Topics of research included environmental risk assessment, population dynamics, gene movement in the landscape and optimal management of production systems.  These UK sources presented excellent opportunities to expand. Coupled with the Scottish base funding, they allowed appointment of research and technical staff [2].

The UK sources petered out in 2005-2006 – for various reasons, including changed priorities in UK ministries and an increasing difficulty for Scottish Institutes to gain access to UK competitive schemes. The period 2007-2009 was a low point. If the axe of external review had fallen at that time …… there would be ‘Agroecology no more’.

EU became the major source of funding from 2010

The value of European funding and collaborations became clear during the one EU (blue) grant gained among the sequence of UK grants. It was a taster of the enormous advantage that could be realised by collaborating with many partners across Europe’s diverse cultures and agroclimatic zones.

Following a major redirection of effort, the Group then secured a sequence of EU grants, each for four years (blue bars on Fig. 1), that kept the infrastructure in place and allowed development of new methods and new ideas [3]. Above all, the money enabled us to form major consortia with capability across Atlantic, Boreal, Continental, and Mediterranean climatic zones (Fig. 2), latterly extending to the Balkan.

In parallel with the attention to EU opportunities, the group also returned a series of  grants, coloured green in Fig. 1, funded jointly by government and industry in various schemes (such as Innovate UK). Generally, this ‘industrial’ funding could be aligned with the EU funding and gave a lead into new commercial areas that were to be exploited in the future. 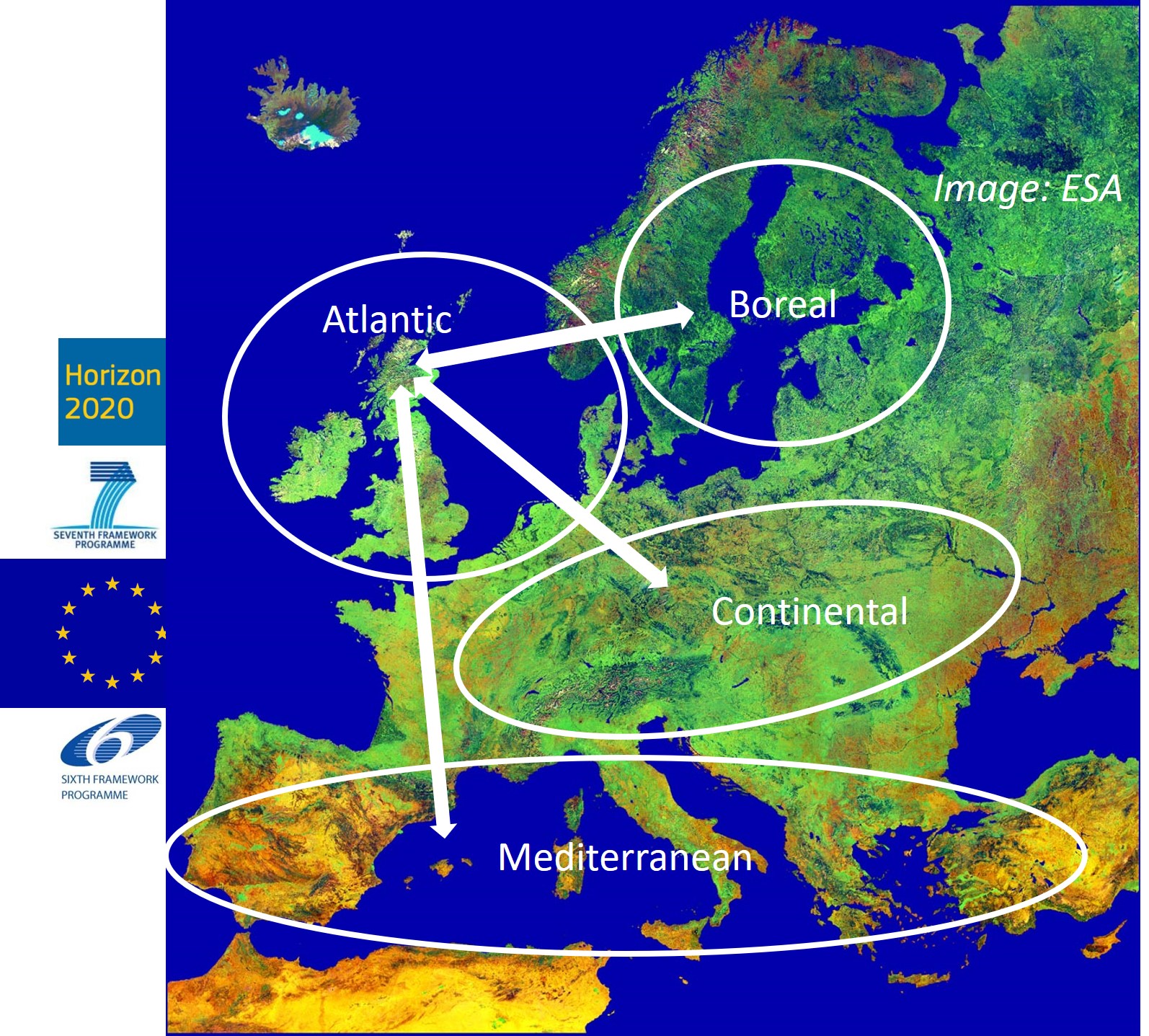 Fig. 2. Map of Europe (European Space Agency -ESA) on which climatic zones are approximated. Arrows lead to and from Agroecology’s base,  the Atlantic maritime hub.

The EU projects were the major consistent source of money that allowed progression. Those grants labelled EU 1 on Fig. 1, with or without a *, were substantial projects in which Agroecology staff worked on the Project Management Group and led major workpackages. Those 4 marked EU 1*, were instrumental in alowing us to establish European networks in topics such as gene movement and persistence, legumes and nitrogen fixation, integrated pest management and environmental risk assessment [3].

Then in 2017, the commitment escalated

So far, members of the team had led multi-partner workpackages and served on programme management groups, but other organisations such as INRA (France) had coordinated the projects.

This changed in 2017 after running two successful bids and then coordinating two whole projects.  This was a major achievement by colleagues, especially given the small size of the group and its existing over-commitment to other work. These two large, multi-partner projects, labelled EU 2 on Fig. 1, signalled a new phase in Agroecology’s evolution [4].

They and the other existing EU project won at the same time will continue until 2020. The sheer degree of networking and organisation across Europe has risen above expectation – we are now collaborating with probably over 100 organisations – research institutes, universities and small businesses.

The degree of drive and ambition evident among colleagues  prompts the question ‘how’ not ‘what’. That the subject will continue to succeed by the efforts of such people is not in doubt.

The question of ‘how’ rests in the opportunities for funding. The EU was hard to get into for a first grant: the competition was and remains fierce. Very high standards had to be maintained when bids were led by others. Now even higher standards are expected for coordination.

The three current EU grants continue until well after the date at which the UK presently expects to withdraw from the EU: continued funding to the end of these grants has been guaranteed we believe. Colleagues are active as coordinators or partners is still more bids. Yet despite the great uncertainty over withdrawal from the EU, there is no option but to continue this emphasis in Europe …. yet at the same time to seek out additional opportunities more widely.

There are many questions to be argued over whether small research groups should spend so much effort on bidding for new funding above what the base provides.

What does the money do? First, in our case, it provides people with work, wages, opportunity for improvement, scientific contacts in other countries, and visiting students and researchers. It enriches their scientific experience immensely.

Second, it magnifies our field and lab (but mainly field) experience by allowing us to operate consistently across many sites over several agroclimatic zones. The north-east Atlantic maritime lands in which we are based are themselves diverse, yet conclusions reached across all regions from the Boreal to the Mediterranean and Balkan have unassailable weight.

What is best – hone your skills to bid competitively with all the effort that takes or lie content with base funding?

[1] The Agroecology Group became so named somewhere between 2000 and 2005 in accord with the collective wishes of its members. Its name was retained when in 2011 the Scottish Crop Research Institute became part of The James Hutton Institute. That change had no effect on the progression of funding in Fig. 1.

[2] Names of project leaders are omitted from this post because the effort depended on all staff. The first phase of funding allowed the appointment of all current senior researchers and most long-term field and lab technicians. Several colleagues who made important  contributions have now moved on, or sideways to remain in the Institute. Further details of people involved can be found on the Hutton’s Agroecology group pages and through the links below.

[3] The EU grants up to 2016 and main investigators are described briefly on these pages at The contribution of European funding.

[4] The three EU grants that began in 2017 are TRUE on legumes, DIVERSify on mixed cropping – both of which are coordinated by Agroecology – and Tomres. The links lead to respective project web sites. [Personal note – my role in EU projects more or less ended in 2016: though it was good to watch from a comfortable distance the efforts to bid for the three successful  2017 starts.]