The detailed records of pesticide usage compiled by SASA, or Science and Advice for Scottish Agriculture [1] have been used for many years and to various ends by the Agroecology group at the James Hutton Institute. Recently the group began using the records to map the likely loading of pesticide at different scales and in relation to various features of the landscape.

The data on pesticide are collected as part of regular government survey. SASA asks a sample of farmers across the region to provide detailed returns of the crop-protectant chemicals they use on specified types of crop and grass – such as winter wheat, spring barley, potato, oilseed rape,  rotational grass and permanent grass. The active substances and the number of times they are sprayed onto fields are collated and summarised in reports, every two years for arable crops and every four years for grass. 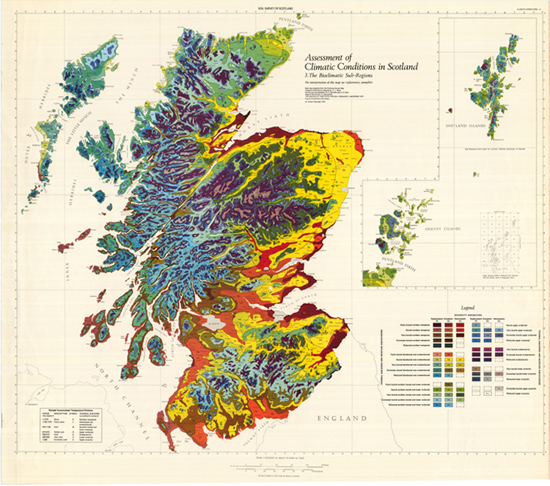 Productive agricultural land lies in oceanic climatic zones, mainly around the east coast – generally within the red and yellow zones shown on Birse’s 1971 map in Fig. 1 [2].

The latest survey for grass published earlier this year confirms the results of the previous survey that most managed grass grass receives very low pesticide inputs. Typically, 3% of rotational and permanent grass is treated in any year, mainly to control broadleaf weeds. Contrast this with the yearly 10 pesticide formulations applied to winter wheat and 20+ to potato.

Over much of the lowlands, crops and grass are grown together in the same landscape, thereby creating a highly variable mosaic of pesticide loading. Combining SASA’s surveys with data on the crops or grass grown in each field enables construction of a map of ‘nominal’ pesticide application based on the assumption that each farmer applies the national average pesticide for each type of crop or grass. 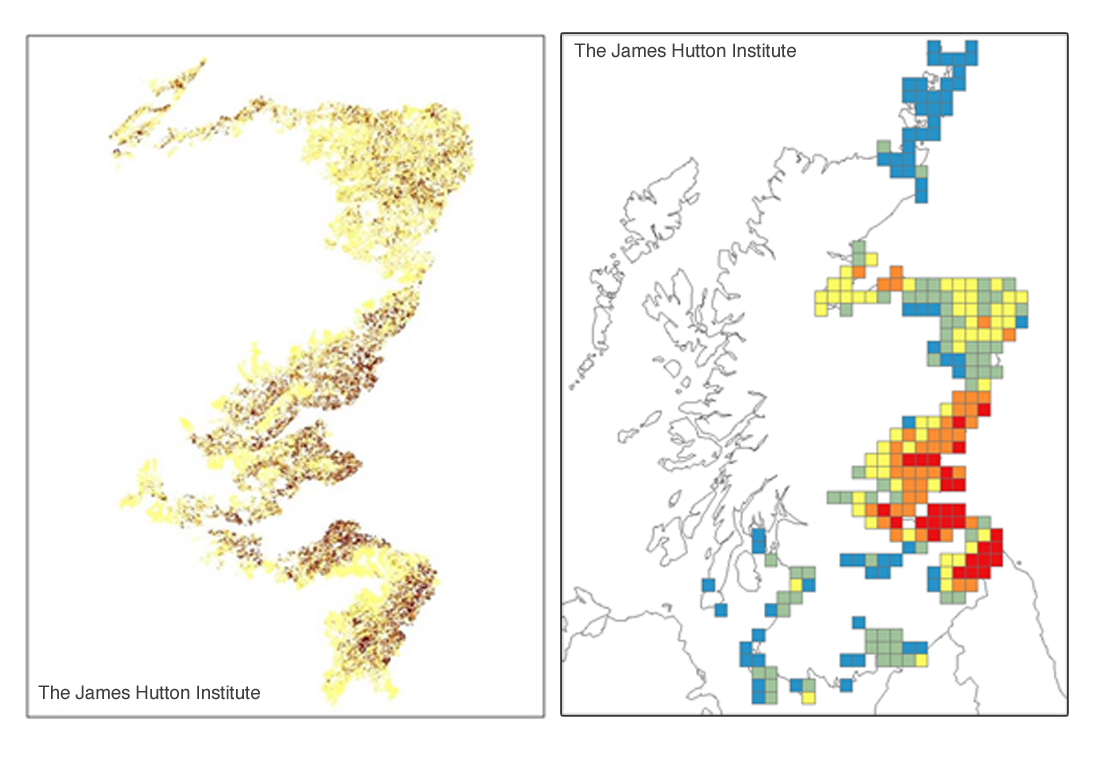 Fig. 2. Maps of (left) relative number of pesticide applications for each registered field (dark brown high, yellow low) and (right) an example of the data being used to illustrate spatial aggregation, in this instance the mean pesticide in 10 km grid squares (maps by N Quesada, GS Begg and GR Squire, James Hutton Institute).

The map based on individual registered fields in the east between the Moray Firth and the Borders is shown on the left side of Fig. 2. Dark brown indicates high pesticide applications (9 or more formulations per year) and light yellow 0 to 2 applications. Agricultural land in much of the rest of the country (including the uncoloured areas in Fig. 2) is classed as ‘rough grazing’ of which less than 0.5% gets any crop-protectant pesticide.

The map to the right, covering most of the country, shows how the field-by-field data can be aggregated in various ways, in this case to show average loadings in 10 km squares.

A short article describing the method was published 30 November 2018 on the James Hutton Institute’s Linking Environment and Farming LEAF web pages an extended version of which will be available on this site.