The 2018 summer of low rainfall was one of the driest on record. Cereal grain harvest dipped but did not fail, loss of production caused more by conditions in the previous winter than the summer drought. A further example of grain harvest’s resilience to untypical weather in the north-east Atlantic.

This extended version of an article originally published on the Living Field web site [1] looks in more detail at the rainfall patterns of early summer last year in lowland Scotland.

The long summer of unusually low rainfall in 2018 parched much of the grassland and stunted many of the cereal crops in eastern and central regions. The wheat and barley appeared to suffer in many places. A record low for grain output looked set to happen. Yet the yield figures suggest a remarkable resilience to what turned out to be unusual weather for the region.

First the rainfall …. How low was it?

The Met Office provides several valuable series of historical weather data. The analysis here uses the daily rainfall series for regions of the UK from 1931. The method of deriving such regional records by combining site by site observations was described by Alexander & Jones in 2001 [2]. The rainfall series has been continually updated since then. The Met region ‘East Scotland’ is the one where most of the wheat, barley and oats are grown.  The period in 2018 from April to the end of August joins that of several other years in being unusually dry – 1955, 1976, 1981, 1984, 1995, and 2003 all had rainfall below 200 mm (Fig. 1a).

There is little sign of any major trend in either low or high rainfall over the main summer period. Many of the other years after 2000 were much wetter than 2003 and 2018. The highest rainfall of recent times was the very wet 2012, which had more rainfall than all other years except two. What distinguishes 2018 is the pattern of rainfall.

Many of the years having low summer rainfall had a fairly wet May, as evident in the steep rise in cumulative rainfall in 1976 and 2003 in Fig. 2. The same pattern occurred in the dry 1955 (not shown). This rainfall in May fills the soil enough to allow the crops to last through a dry June and July at which point most of the season’s growth has occurred.

2018 had a wetter April then most other dry years but then low rainfall until late July. Although 1984 had the lowest rainfall overall, 2018 had the lowest from late April through to mid-July, which is when the solar income is large and when the crops are bulking. Summer rainfall in 2018 would have been less in total than in 2003 if it had not been for that rain in late July and early August. A day by day view of the rainfall in 2018 compared to 1984 and 2003 is given in Fig. 3. 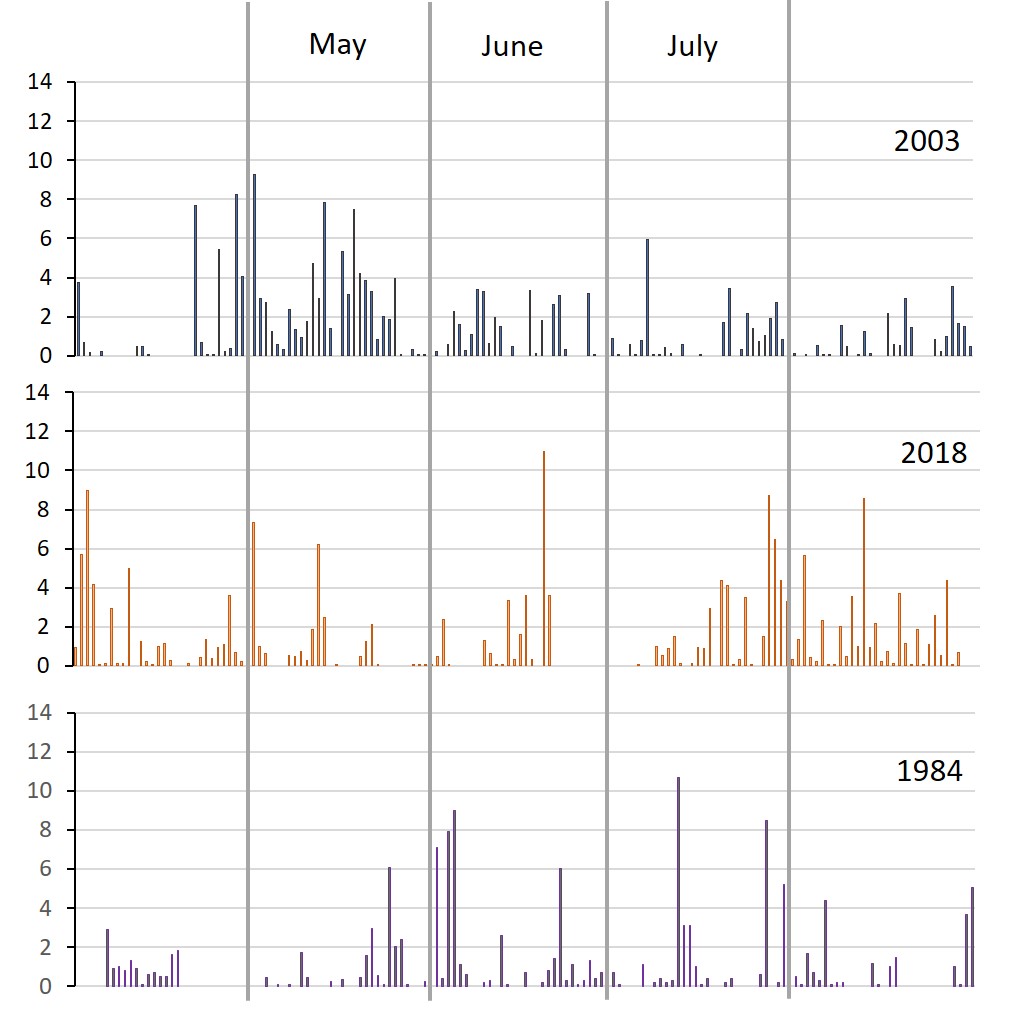 Fig. 3. Daily rainfall from 1 April in three contrasting years: 2003 and 2018 had a similar total rainfall whle 1984 was the driest over this period.

So did this low rainfall during crop bulking have an effect?

Each year the Scottish Government provide absolute records of crop-areas (i.e. all fields counted) and estimates of yield per unit area based on data from a range of sources. The final estimates are published in December [3].

The wet year of 2012 provides a comparator: most crops but particularly wheat, oats and oilseed rape produced a low yield per unit area that year because of waterlogged soil and low solar income [3]. Total cereal output was lower that year than in any other year of the past two decades.

The records show 2018 yields were no worse. Wheat yield per unit area (t/ha) was down to near the 2012 value but most of the other crops showed little fall in yield (Fig. 3). When expressed as a percentage of the average of recent years, the simultaneous dip among crops in 2012 was not repeated in 2018 (Fig. 4). Spring barley, the most widely grown crop suffered a minor fall to 98% of the long term average.

Was anything different about 2018. Total cereal output (the sum of wheat, barley and oats) was low, in fact just above the 2012 value, but this was due to reduced land areas sown with cereals, mainly winter barley which was sown in the autumn of 2017 before the summer drought of 2018. Sources in [3] state ‘Winter barley area dropped by a fifth due to poor weather conditions. This, along with a four per cent drop in yield resulted in production decreasing by 24 per cent.’ The greater effect therefore occurred before the winter and ‘was a result of the difficult weather conditions in late 2017.’

It appears therefore that yields per unit area – the best guide to the effect of weather on the summer bulking conditions – were not strongly affected by the 2018 drought.

Caution is needed because the yield figures are an estimate, i.e. not measured for all crops. Some crops were not harvested for grain at all, where the weather ‘resulted in a number of farmers choosing to whole-crop due to the low yield and quality [2].’ (To ‘whole-crop’ means to take all the grain and straw together for feed without separating the grain.) Some of the poorest yielding fields might have been removed from the estimate of yield since whole-crop cereals would not have been included in grain yield inventories.

Could grain yields collapse in this region?

Drought leads to zero crop yield in many countries. Even in parts of Australia, where standards of agronomy and resource-use are high, recent droughts have led to total failure of cereal crops that are not irrigated.

So could crop failure occur here? In principle yes. But it would have to be a much drier year than any since the records began in 1931. Given there is no discernible trend towards low summer rainfall and that most years between 2003 and 2018 were wet, and two of those years – 2014 and 2016 – produced among  the highest mean yields ever in this region, there are certainly no indications that summer droughts will become a feature of the Atlantic maritime cropland.

[1] The Living Field web site at Resilience to the 2018 drought.

Funding  The author currently has honorary (unfunded) status at the James Hutton Institute. A background knowledge of crops and climate in Scotland was gained in past years through funding through the Scottish Government Strategic Research Programme.