Two intercrops were examined, each consisting mainly of a grain legume with another species sown in some of the rows. The legume was the main crop; much of the grain – chickpea or groundnut – would be sold at market.

The legume would most likely have fixed atmospheric nitrogen. The other crops used mineral nitrogen available in the soil. The legume and the other crop also differed in their developmental phasing. The legumes were indeterminate in that they kept on producing reproductive sites, flowers and pods, until they ran out of resource or were harvested; whereas, the other crops – maize and sunflower – were more determinate, setting a reproductive head and filling it.

This difference in determinacy is important in bet-hedging – the determinate maize or sunflower have to be left until the whole plant matures before the single organ (maize cob, sunflower head) is removed. If things get rough – if resource runs out – then it’s crop failure. The indeterminate types offer more flexibility; harvestable grain can be removed over a long period, such that even if they run out or water or nutrients, all is not lost.

In the dry season, the Irrawaddy river contracts to a still-wide, navigable channel near the centre of its full width. In some places, crops are grown on the higher levels of the dry river bed, next to the perennial vegetation on the  bank.

Here, groundnut Arachis hypogaea had been sown over a few hectares, in rows more or less parallel to the river bank. It was the dry season, so the plants were growing on water stored in the soil or in the water table. Maize Zea mays had been sown in every fifth row, which therefore consisted of groundnut and maize in close proximity. The maize was beginning to flower (males first) whereas the groundnut was still in leaf. (At sunrise, it was possible to watch the the groundnut leaflets opening over a few minutes as each was lit in turn.)

Sowing in rows was probably the most convenient means of establishing the groundnut. The maize was probably wanted for a small market or home consumption. Sowing the maize in rows would also have been for convenience, ease of harvesting with little disturbance to the other crop.

Did the maize interfere with the groundnut? It shaded the plants below it, mainly in its row and the ones to either side, but such shading would not necessarily reduce the growth of the groundnut. Maize has the C4 photosynthetic pathway and hence an ability to use light at high intensity. Groundnut has the C3 pathway – plants become light-saturated at much less than full sunlight.

Studies elsewhere have show that in such groundnut-maize intercrops, the shade from the taller maize causes little reduction in growth of the shorter C3 plants. Rather, the taller plants might lower the leaf temperature of the shorter ones, and hence lower the risk of over-heating or scorch. The groundnut is unaffected, so the maize harvest is ‘for free’. Of course, the two would compete in the soil, but these river bed soils are likely to be rich in nutrients from eroded soil upstream.

Did the groundnut give fixed nitrogen (N) to the maize? It might do, but not necessarily in this case. Maize grows quickly and takes up much of the N it needs in the first half of its life. Groundnut grows more slowly, and would need its fixed N for its own leaf. Release of N by groundnut would mainly occur later when the plants were fading before harvest. As for cotton on page 2, the benefit of the legume to the non-legume is in reduced competition for mineral N in the soil.

Since the soils would be washed by the river in the wet season, however, much of the fixed N might be taken up and deposited elsewhere. There may be little long term benefit of the legume to the fertility of the local soil. 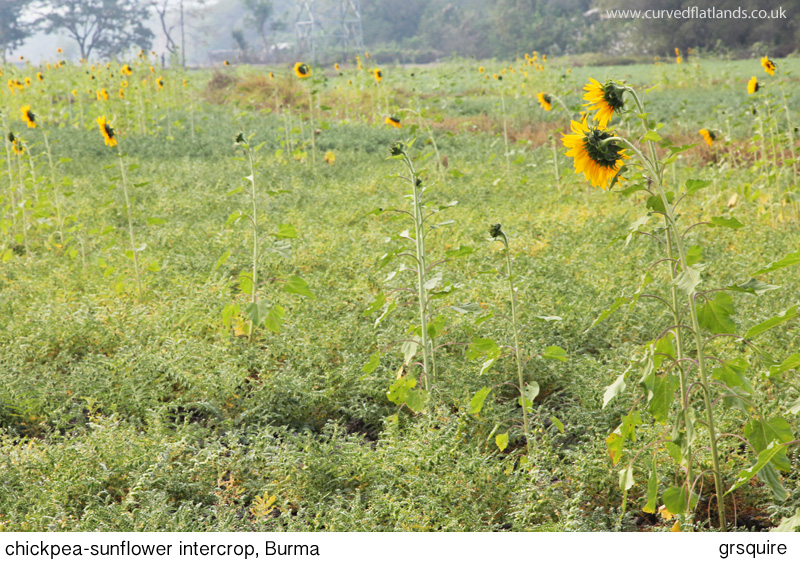 A field of several hectares was seen about an hour’s drive from Mandalay. As for groundnut above, chickpea had been sown in rows over the whole area, whereas sunflower had been planted also in rows about 10 metres apart.

This intercrop differed from the groundnut-maize above in several respects.  Both crops had the C3 photosynthetic pathway. Both were developing at similar rates – chickpea still held a few flowers, but most of the reproductive sites held filling pods, while sunflower heads were variously in flower or filling their seeds.

As for groundnut and maize, the chickpea would likely conserve its own fixed N rather than release it to the soil; and sunflower would have access to mineral N from the rows around it.

It is difficult to see what benefit the sunflower would bring to the other. There was too much space in the sunflower rows for them to have had any role in reducing windspeed or trapping air borne soil. Most likely, the sunflower was grown in rows for ease of maintenance and harvest. 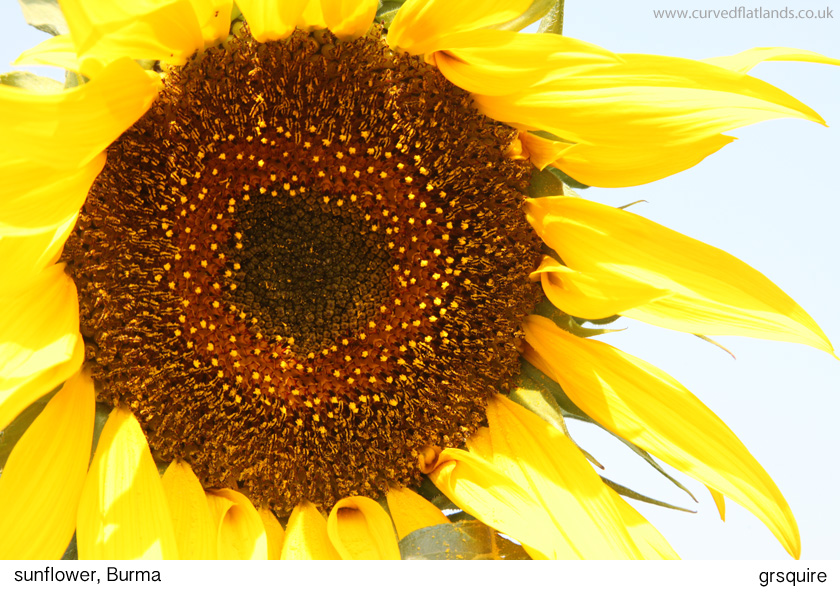 But again, why in rows rather than in an area of field reserved for sunflower alone? In both these annual intercrops, patches of field occurred in which the crops had failed. In the Irrawaddy soil, areas of caked, cracked soil appeared in which both species had died, and in the chickpea field, patches of bare soil or yellowed plants appeared (perhaps indicating disease or nutrient deficiency).  Row planting is a simple way to ensure that both species experience the rich as well as the poor areas of land.

There’s probably more to it than that. Our guide-interpreter, despite herself having agronomic knowledge, was unsure of the reason for the widely spaced sunflower (and there was no one around to ask). 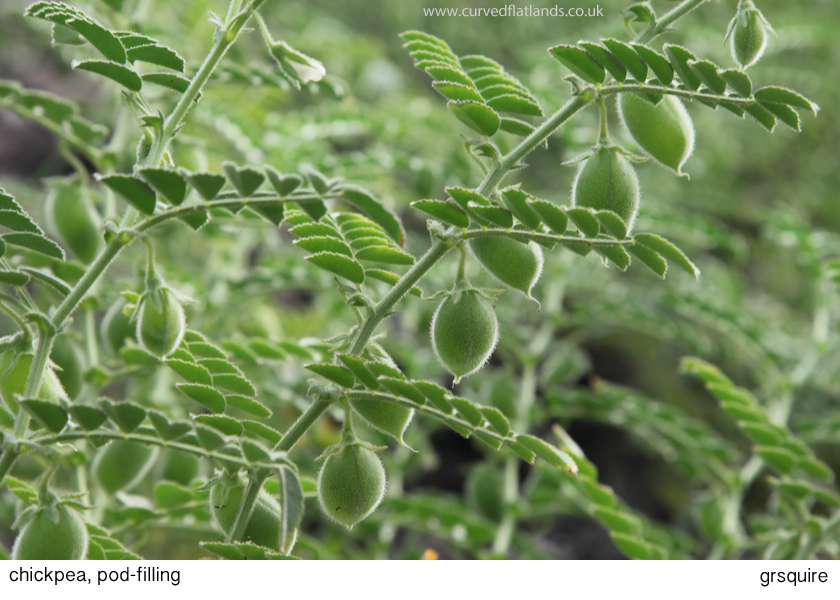