Having ceased employment at the James Hutton Institute in September 2018, aiming to slip away gradually, yet calling in every week or so to keep writing and analysis alive, and to help tend the Living Field garden, then transitioning to a new life quietly and without fuss ….

No chance it seems. Some past colleagues (still colleagues) planned a small surprise party. I’d got wind of the event and evaded it for some months but when I thought they’d let it slip, a cunning ruse brought me to the Living Field cabins one Friday afternoon in June. Walked through the door and there they were – surprise! surprise!

Certainly touched I was by the trouble people had taken. I imagine Gill Banks and Linda Ford and Gladys Wright were the instigators, but quite a few others had prepared things. Even the new head of Agroecology Graham Begg had me hoodwinked.

First there was a card on which were printed many photographs I had taken of plants and landscapes. They were gentle with me – the only (slightly) embarassing photograph (taken by someone else) was one of me posing with a large plastic paper clip round one ear. Got off lightly someone said.  Inside the card were many good wishes and thanks for doing this and that.

I received a couple of presents. One was a batch of ale brewed to order by a small company. The bottles had a label which shocked me. On it was a photographs of a bearded person wearing a white collared shirt and brown jacket and with a head full of dark hair and beard to match.  They said it was me and on inspection so it was. It must have been taken in the 1970s or early 1980s at Nottingham, Sutton Bonington, where I spent many happy years in the Environmental Physics Unit (as a tame biologist). 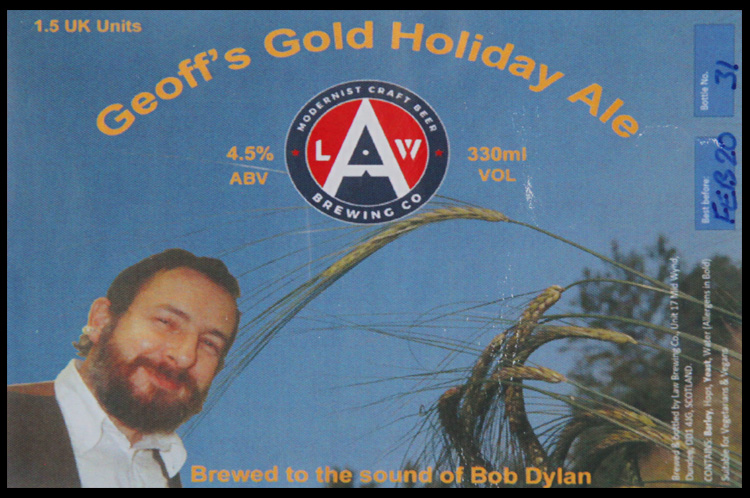 Various hints led me to point the finger at Agata who worked here on field surveys in 2014 before going to Nottingham for a post-doctoral. (Did I give her a reference!) Debbie Sparks at Nottingham is implicated aswell since she must have pointed out the photo to Agatha when she got there and had it scanned. The photograph was among others on a wall, still there after all these years.

Looking closely, I noted someone had drawn what looked like an ear piercing, but I can state that I have no piercings anywhere.

The conspiracy grows. The ale was brewed at the Law Brewing Co – ‘modernist craft beer’. And along the bottom of the label was writ ‘Brewed to the sound of Bob Dylan’. Couldn’t be better. Then I recalled that Danny Cullen, the quantitative PCR guru who worked with us on landscape geneflow studies had started up his own small brewery after leaving the Institute a few years ago. And it turned out that Danny had brewed the batch in question. Who designed the label with ear piercing and bere barley images is anyone’s guess? (Gill and Linda no doubt).

The problem is that all bottles in the batch were hand numbered. Each is unique and probably worth a bit in years to come. Can I bring myself to decapitate one and sample the contents? …. I ask repeatedly.

My interest in the dawn of agriculture and the history of settlement was recognised by a second present – an artwork by Jean Duncan in her unmistakable style. It was drawn and painted on a board which was fixed onto the backing of a frame.

It had ancient cereals, one to each side, superposed on a ‘landscape’, some parts drawn finely by a knife and other parts painted. The landscape was of mounds, circles mimicking the sun, and field systems covering between them 6000 years of crop cultivation and celestial observation, both of them intrinsically linked. The artwork is shown below, resting in a ferny corner, but then brought indoors  to save it from the rain. Thanks Jean and thanks to Gladys (I bet) for organising it. 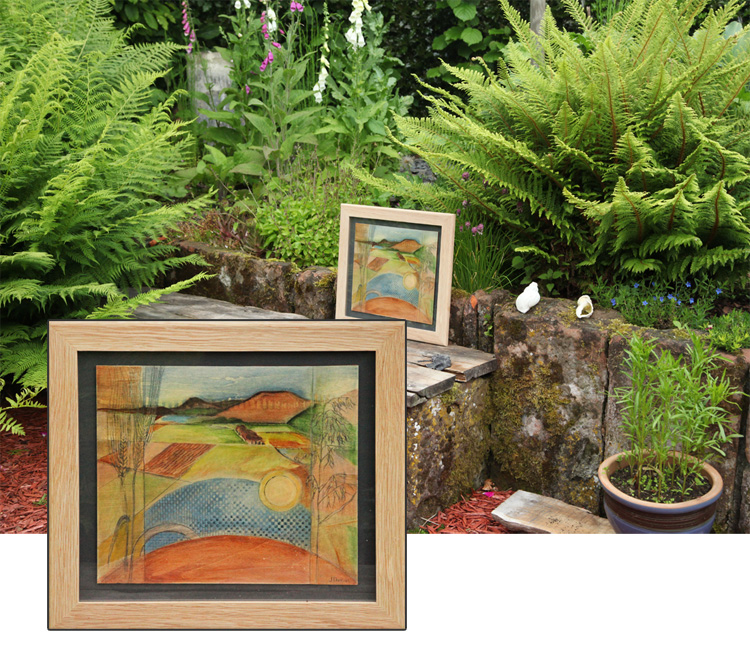 Thanks for the memories … but there’s more to come

People make an organisation and I have been more than fortunate in having worked with some wonderful people over the last 25 years in Dundee at SCRI and then the James Hutton Institute. Ideas and methods make research … not all of it works but enough has worked to ensure funding continued unabated over this time to allow us to collaborate first across the UK and then throughout the EU and globally. The ideas and methods in our topics have evolved though many changes in institute branding and management and have indeed prospered sometimes against the odds.

Having settled into a transition phase, letting many of the commitments of office slip away, and leaving a few months to let the mind settle – perhaps the best is still to come in terms of concepts, ideas and yes … a synthesis of the 25 years and more. Many thanks to all. I’m honoured by your words and gifts.