Here we look at the results of our research as they appear in scientific publications, online and at conferences. Each topic is introduced as a ‘post’ then expanded here. Articles will in time be grouped under main topics such as nitrogen fixation, carbon in soils and yield gaps.

Commentary on the recent paper by Iannetta et al 2016 in Frontiers in Plant Science.

Nitrogen-fixing legumes such as peas and beans, clovers and vetches, were the main source of nitrogen in croplands until the early 1900s. They were extensively tested and grown in the Improvements era after 1700, and became an essential part of crop rotations, even though the biological mechanism of fixation was not then known. By fixing N gas from the air, they could provide their own nitrogen for growth, and the residues they left in the soil, in the form of roots and root nodules, provided much of the N for the next crop also.

Legumes receded in the 1900s, displaced by mineral N fertiliser, and then by imports of N-rich stock-feed from the Americas. Agriculture in north west Europe soon became dependent on manufactures and imports. However, the rising cost of N-pollution, the monetary cost of the fertiliser and the lost benefits, now increasingly realised, of legumes to the wider food web and soil structure, has brought on a reappraisal of legumes in mainstream crop production.

So it is incongruous that there are very few measurements of N fixation in northern, temperate-zone, agricultural fields. Individual measures of fixation in crops and pastures are not in themselves high-profile science, compared to, say, the insights to the mechanism of fixation at biochemical and genomic levels. Yet without knowing kilograms of nitrogen per hectare (kg/ha) fixed in real crops and pastures, it is difficult to design and justify new crop and forage systems in which manufactures and imports are replaced by local N.

The recent paper by Pete Iannetta and others in Frontiers in Plant Science fills in some of the gaps. The contribution of N fixation was estimated in a range of grain and forage legumes, sometimes grown alone and sometimes with other crops in mixtures. The analysis was based on existing data from field experiments managed by collaborating groups in different parts of Europe. The study added value to these data by estimating components of the N-balance, including fixation as the mass of N entering the system that could not be accounted for by any other means.

Results Experimental plots were separated into those with only legumes, those with no legumes and those with a mixture of legumes and non-legumes.  The study also gave no support to the contention that cropping systems containing legumes are less productive: while the non-legumes (e.g. cereals, grass) produced the most plant (bio)mass, the legumes produced harvest or forage with the highest nitrogen content. Mixtures of legume and non-legumes (mixed within a crop or sequentially over time) were as productive as non-legmes but with much less fertiliser nitrogen.

Compared to typical N fertiliser inputs to spring cereals of 100 kg/ha and to winter oilseed rape of 200 kg/ha, the grain legumes fixed around 70 kg/ha and some mixed forages up to 115 kg/ha.

Next steps None of these legume-based crops had been optimised for N fixing ability, for example by finding the best match between rhizobial strain and legume plant (rhizobia being the bacteria that form the N-fixing symbiosis in the plant’s root nodules). As studies in South America and Australia have show, encouraging the most effective symbiosis can lead to increased fixation in future temperate legume crops and mixtures.

Environmental factors influencing the fixation rate of faba beans are being examined at the Hutton Institute’s Centre for Sustainable Cropping near Dundee. Colleagues are working to isolate and type rhizobial strains from various soils and legumes with the aim of generating a ‘bank’ of strains for potential use in new legume-based agriculture. 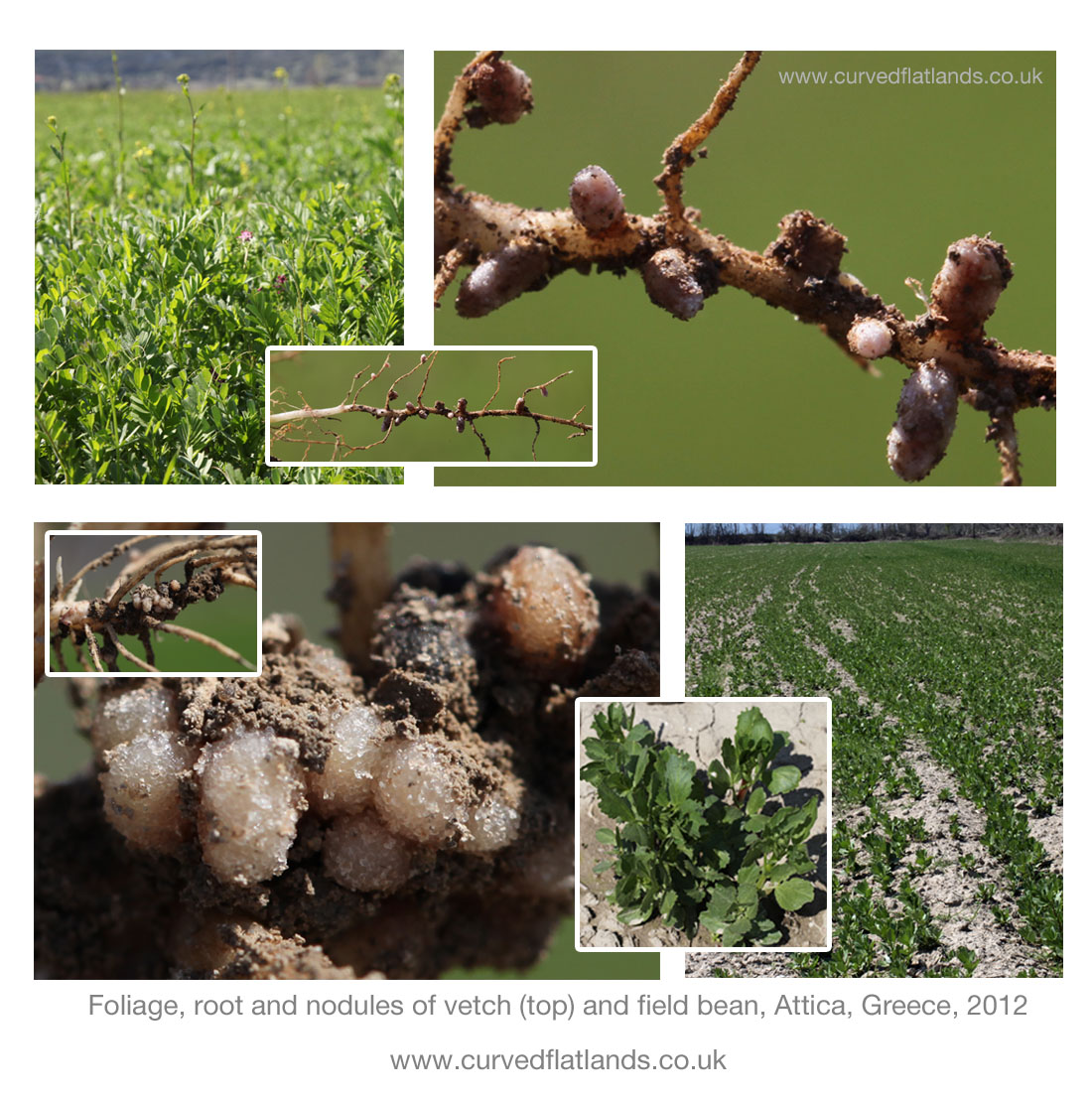 Images above taken on a farm in in Attica on a field trip in the EU Legume Futures project.